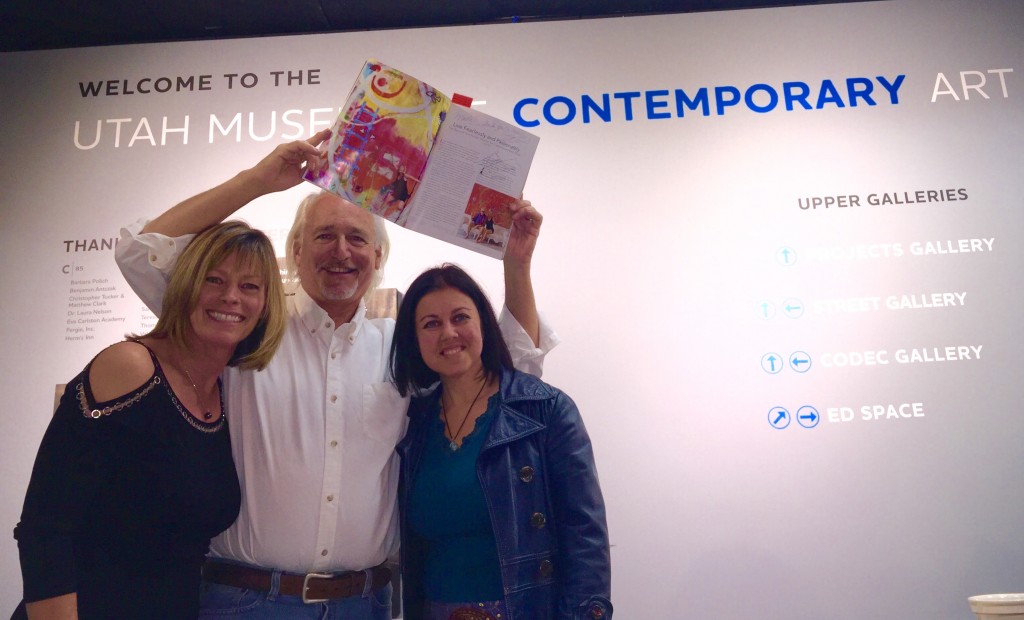 An Evolution of Artists’ Passion for Creativity and Each Other

It was serendipity that I happened upon BECA’s website when I was searching for an artist from Sun Valley, Idaho. It soon became clear that serendipity shines bright in Steve Behal and Jeannie Catchpole’s—who make up BECA, the first two letters of the artists’ last names put together—life and art.

Not only did they grow up within miles of each other, they went to the same art college, but didn’t actually meet until 1984. Sparks flew between Catchpole and Behal, but life took them in different directions. Fast forward 25 years and serendipity brought them together again—this time for good.

It was easy for me to step back in time and visualize their life as I sat with my coffee and read their screenplay, “High Desert Traffic (A True Story…Mostly).” Written by both Catchpole and Behal, this piece took me to the moment of conception of their collaborative art.

Their art is spontaneous, expressive, vivid, and full of life. When I see their paintings, I am reminded of my days as a student in awe of Mark Rothko and Jackson Pollock. I never dreamed that I would be able to chat one-on-one with artists who evoked the same magic for me as did those Expressionist pioneers.

Naturally, when I sat down to talk with Catchpole and Behal, I wanted to know how their artistic style came to be. Both artists began in their own form of Realism, and have since shifted gears to Abstract Expressionism. I asked Catchpole what that transition looked like for her.

“The only way to do that was to throw away the watercolors and paper and never touch them again,” she stated.

For Catchpole, painting realistic watercolors wasn’t exciting anymore. Her last watercolor took six months to complete and was her pinnacle piece. What was left for her to strive toward? In realism, you know where to start and where to end because it looks lifelike.

Soon, it was big canvases, big brushes, and bright, vivid acrylic colors that caught Catchpole’s imagination. She only needed to paint one transitional, big-brush landscape before she got Realism out of her system and jumped feet first into Expressionism.

Catchpole’s counterpart made a similar jump from capturing real life to striving for the abstract. After being a photographer for many years, Behal didn’t want to be behind the camera anymore. He studied acting, but painting filled in extra pockets of time ever since he was a child. As he moved more into painting, he would capture the essence of a moment in time with elemental forms, focusing more on feeling than representing the moment realistically.

These two artists came together and began to paint collaboratively. As we talked, I wanted to know more about how two painters work on a single painting together.

“I do the green.” Behal said as Catchpole laughed. Apparently they get this question a lot and Behal loves to have a little fun with the interviewer, delivering the same answer each time.

Their first collaboration was the painting “High Dessert Traffic.” The painting comes together beautifully, but it is clear that there are two distinct painterly techniques.

The more they paint together, lines blur in regard to who does what and when. Egos are removed and the purity of the painting’s intention is allowed to present itself.

According to the couple, paintings begin on impulse. There are times when each begins one, takes ownership on it and doesn’t want the other to be involved. Other times, there is an open invitation to jump in anytime and paint what you feel the canvas needs.

Behal joked saying, “Sometimes I want to get my hands on one of Jeannie’s [paintings] and she won’t let me!”

Art is a metaphor for their relationship. There are times when they just don’t know what to do, but they always respect each other’s creativity. They even wrote that into their marriage vows as a reminder to support each other creatively in all that they do.

Each artist has their own style within the painting process that complements the piece as a finished whole. Catchpole focuses on color while Behal is more about form. As they each come at the painting from a different angle, the painting comes together in a way that allows the viewer to get lost in the “what is” rather than “who creates what.”

Looking at the paintings, it is clear that the feeling they evoke within you is the focus as you open yourself up to them.

“Picasso took 92 years to learn how to paint like a child again,” Catchpole stated as she began to explain her painting philosophy.

She tries to grasp more of the universal communication that children are inherently born with. No matter the child’s language, you can look at their art and know what they are feeling. There is no fear in their expression. Letting creativity flow with no fear is how Catchpole approaches life and art. That need to express with visual communication led her to large canvases and bold, bright colors.

Painting together is not always easy as the couple sometimes lives in different places. Catchpole is based in Sun Valley, Idaho while Behal is often in Toronto. There are times when Catchpole wishes Behal was there to paint on a certain piece. But, when they are able to commingle in the paint, painting becomes a dance that changes all the time.

It has become easier and cleaner over the years as each has removed their own Ego from the process. It’s not about how it will come together, but who is in the moment or who has the vision. Like life, their dance and art is always evolving.

“We paint what we are feeling at the time,” said Behal.

They let go and just paint, true to their own vision and exploration. Each painting takes on a life of its own once it’s done, and it’s time to move on. There are some paintings that may not be quite ready. They will go away only to be revisited at a later time when inspiration hits and either Catchpole or Behal know what that painting needs.

In all that they do—in life, love, and art—one mantra is clear: Do not fear to be true to yourself. As Catchpole and Behal evolve as painters, they do not attempt to emulate who they used to be and instead try to move forward into who they are becoming. Audiences may come and go, but those who stay for the ride will be rewarded with fresh and exciting art.

I love their art and what it evokes in me because it is a visual example of how to embrace life fearlessly and passionately as we all grow into our own true selves and find our purpose.